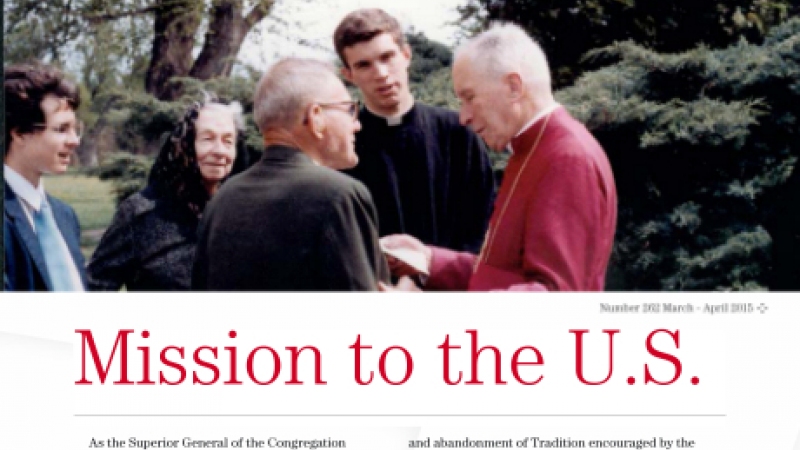 This issue of the Regina Coeli Report offers a very interesting and informative look at the early days of the SSPX in the USA.

The travels of Archbishop Lefebvre in the United States after the Council were motivated by his Faith in the immortal Church and his mission to save the Catholic priesthood.

Mission to the U.S.

Over the next 16 years he [Archbishop Lefebvre] traversed the United States founding a seminary, dedicating numerous churches, confirming thousands, giving conferences, and making it possible for many Catholics to attend the holy sacrifice of the Mass offered by traditionally-formed priests. The impact of his presence in the U.S. is evident today in the number of chapels and churches where the Latin Mass is offered.

I visited Econe several times. Sometime before he died, I remember coming into the main building in Econe. The archbishop happened to be standing in the corridor. At that time he was pretty elderly. He did not look as vigorous as I remembered. I embraced him. This was probably in 1989 or 1990, a short time before he died.

On one visit in 1980 the archbishop was flying from Spokane to San Francisco. He had been visiting the chapel in Post Falls. Everything was going well and the archbishop and the people traveling with him boarded the plane. So we took off, flying down to California.

St. Thomas Aquinas Seminary has edited another book compiling words and writings of our dear founder. This is a translation, sometimes quite literal, from the French work of Fr. Troadec, who has now produced a trilogy based on the Archbishop’s texts. Get the book>

Send us your photos illustrating a particular theme [Our Lady]. We will choose the best from all submissions received by the deadline [May 15, 2015]. Entries will be judged on photo quality, artistic sensibility, and how well they tell a story best representing the theme.

Our Lady of Fatima Pilgrim Statue

Our Lady will begin her journey on March 25, 2015 on the feast of the Annunciation at the Regina Coeli House in Platte City, MO with a crowning of the statue.

A truck driver, a simple man and his wife found an SSPX chapel in 1994 in Texas. He started working at the U.S. District office part-time “to help the brothers” while still driving. He mentioned that if a full time position ever opened, he would be happy to come off the road and devote his time to helping priests. He says, “Ten minutes later, I had a job.”

Read the entire issue in PDF